I really don’t know what to do with myself at the moment I am feeling very weak and tired, dizzy, sick, achy and my brain feels full of cotton wool so can’t concentrate on things.  Spent a lot of yesterday sat in front of computer just looking at things, but not really doing anything, that’s not really good for me as it makes me dizzy and tired, but I can’t do nothing at all and I couldn’t concentrate to do things I wanted to do like crafts or reading.  I was mainly looking at clothes and shoes thinking it would be nice to have something new for my holiday, but as we are staying in this country and will just wear jeans and tops all the time, there is not really much point.  I’d like a new pair of smart shoes too, but as I wear them so rarely its not worth the expense.

We had another crazy weekend with me travelling with Emily by train to Sheffield whilst Rob went to Chester field by car to see his grandma.  It was nice to have some one to one time with Emily, but very hard work walking further than I can really manage and being solely responsible for Emily.  Emily was very well behaved though and helped me as much as she could.  When I am in my wheelchair she gets very naughty as she feels left out and not cared for.  I would do it again for Emily’s benefit, but not when there is so much else going on.

Saturday was a very busy day as we went to my Grandma’s house to collect some more things.  it is probably the last time I will see the house as it has to be handed back to the council soon.  Its so sad seeing the house looking so bare and dividing her possessions up.  I had a dream last night, she was asking me where certain things had gone, I do hope she approves.  In September we are having a sale at Rothwell Baptist Church to sell off some of her books, CDs and DVDs and donating the money to her chosen charities the NSPCC and RNLI, so hope we can do her proud.  I feel so useless not really being able to physically help and being overwhelmed by all the stuff and people about, trying to get my head around what was going where and not even able to take the children out of the way and keep them entertained.  There is a park not far away, but I can’t get there 🙁 or even round the corner to the shop.  I want to help, but end up being a liability.  We now have a room full of bags waiting to go onto a charity collection, boxes of books for the sale and much more stuff stored at my mums to be sorted and sent off to relevant places.  And a fridge freezer which Rob will have to go on his own to collect as we cannot all fit in car with it in and probably needs to be before we change car as the new car is smaller.

When we arrived back at my Mum’s Robs dad arrived to tell us that Rob’s grandma had got worse and we needed to prepare for the worst.  We are just wondering how many more things can happen.  I know you can’t stop people being ill or old or having accidents, be we don’t seem to have chance to recover from one before the next thing comes along.  Amazingly she improved a bit on Sunday and is still with us, but not well enough to have the operation to repair her hip, so her quality of life is poor.  We just have to wait and see how things go, but at 90 years old its unlikely to go well.

Later on Saturday I had an appointment with Peter Byrom who I get my hearing aids from to fit a temporary receiver to my right aid whilst a new mould and receiver are made to try and improve my hearing.  The temporary fitting is very uncomfortable to wear, it falls out and there is a lot of whistling and feedback on it, so I am hoping it won’t be too long before the replacement can be done.  I also can’t hear as well so its frustrating for me and those talking to me.  I have been putting of getting it done as I could not cope with all the things that have been going on as I was told it needed to be done 2 days before my grandma died and I did not want to be without the proper aid until after the funeral and when I was less stressed.  As it happens I am not really in a much better situation now.

We returned home on Saturday as the roads we use to leave Sheffield were going to be closed on Sunday for the Tour de France.  We were hoping for a peaceful day at home, but Emily was very stressed out and very demanding of our time and energy.  She did eventually calm down and go off to play with the children next door.  Rob and I actually managed to sit down and see the end of the Tour in Sheffield and the end of the Men’s tennis final.

It was an amazing weekend for sport in the UK, with the Tour de France in Leeds and Sheffield, my 2 home towns, Wimbledon and British Grand Prix.  Only one UK winner with Lewis Hamilton, but think the UK proved itself an excellent sports venue.

On Monday I had my much needed physio with Julie at Fairways Physio.  My back and neck were very stiff and in knots and my hip had been twinging.  It was a relief to be less stiff, but due to the amount of work she had to do I am still quite sore and dizzy from neck work, I am hoping it will settle down a bit.  I have had to lay off the anti inflammatory pain killers as they are causing sore gums and nose bleeds.  I know if I stop them for a few days it will settle down, but means I only have co codamol for pain at the moment.

The pain a dizziness was not helped by sitting almost 2 hours watching Emily’s sports day yesterday, but these things have to be done. The sports day for the older children in the afternoon got cancelled due to heavy rain. When I got home I was so exhausted did not know what to do with myself.  As ever Emily seemed to pick up on this and her behaviour was rather difficult and trying to keep calm and deal with it was a huge effort.  By the time Emily was eventually in bed I could not face anything else.  Rob was trying to speak to me, but I had no idea what he was saying and had to go to bed.  Once in bed of course I could not sleep and when I did eventually get some sleep I was dreaming as I always do when I am unsettled.  Most of my dreams are about regrets so go back to when I was nursing, 24 years ago now.

This morning was cleaning morning, my cleaner is far from quiet so I get no peace even if I shut myself away.  There is so much I want and need to be able to do, but feel like I am wading through treacle and have a head full of cotton wool.  I know I need to rest, but being unsettled makes it difficult.  I have to try for Emily’s sake, she needs a Mum who can function and give her attention.  She is very attention seeking, but its because she feels we are always doing something else and don’t give her our undivided attention, which much of the time is true and she cannot understand that we can’t do what she wants every minute, this in itself is exhausting.  I read a blog article earlier about attention seeking and although it is about younger children much of it is true and I need to try harder.

I am off to try and get a peaceful rest before Emily gets home from school and hope that she is happier and more settled when she comes home so that we can at least keep calm and do something nice without her unreasonable requests to bounce on the trampoline or run about in the street, which she knows I can’t do, but still pleads with me to do, its heartbreaking.

A final mention for a lovely craft project from Stitching cards a lovely wishing well.  I dare not buy it as I have so many still to do, but I do like it and the idea of Get Well or Wishing you Well! 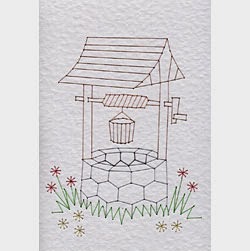