They say that pets are supposed to be therapeutic and relieve stress?  I am not sure about that.  Was woken up by my cat at about 6am, he wanted affection, he is not a very affectionate cat except at silly times!  When I got up I found that he had been sick, perhaps that’s what he was trying to tell me and of course no one else had noticed so it was me who cleaned up.

Later on he did snuggle up with me, but was trying to chew the card I was sewing and then turned his paw to knitting! 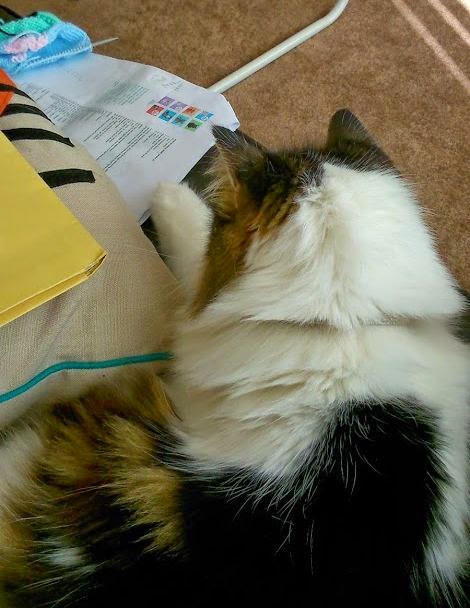 I should not really complain about him, he is very good with Emily who teases him and drives him nuts, but he never lashes out at her, anyone else would know they had upset him. My next cat related job is the litter tray, yuck! Again I should not complain it is only in the last few weeks we have given him a litter tray he has been happy to use garden for the last 14 years, but I think he gets caught a bit short now so is happier with the litter tray.  We got him when he was 9 months old so he was house trained by then.
The pet that is supposed to belong to Emily is the hamster, she does not have much interest in it, well they are a strange pet for children really, being nocturnal.  If she is lucky she sees it before she goes to bed and when she gets up.  But more often than not she doesn’t see it, I think the hamster is wise to her routine as he gets up just after she has gone to bed and goes to bed just before she gets up, but we are seeing less of him now as he is 2 years old so getting on for a hamster.  Today was hamster cleaning day, its actually less traumatic for the hamster to do it when Emily is not around as she does not understand the meaning of quiet and scares him and does not have a clue about being gentle and that he is small and fragile.
It feels a bit like an old folks home for pets with Timmy being 15 and we have a fish that is over 4 years old.  Ah well at least I feel at home with the oldies!
My final job was taking weed out of fish tank, why does no one else do these things.  Guess what the fish aren’t mine either they are supposed to belong to Rob, they would be living in a swap if it were left to him!
well I have done my Dr Doolittle bit now, time to rest before peace is shattered by after school madness.