Today’s news in the ME world is Distinct Changes found in ME.  Just another story in the long debate of is it Physical or is it all in the mind.  If the claims are true they are talking about changes found in first 3 years of illness so how does this help those of us who have been ill for nearly 20 years?  “ those who had the disease for longer than three years did not show the same pattern.” Also “It appears that ME/CFS patients are flush with cytokines until around the three-year mark, at which point the immune system shows evidence of exhaustion and cytokine levels drop.”  I assume that long term sufferers cannot be tested or treated in the same way.  It is of course good news for anyone newly diagnosed or suspected of having ME, not sure why we say diagnosed as we keep being told there is no way of diagnosing ME.

I do get rather fed up of these so called break throughs and yes we know what it is now, there seems to be a different theory every week, but then nothing else seems to be said about it.  Even if this is THE ONE then any treatment or even formalised testing is a long way off, as the study was quite small and needs to be replicated and proved.

In the words of Dr Charles Shepherd, medical adviser to the ME Association

“If distinctive patterns of cytokine abnormality can be linked to both stage and severity of disease, this is a finding which could be used to aid diagnosis and open the door to the use of anti-inflammatory drug treatments that would dampen down the abnormal immune system response.”
But he indicated that this was still some way off.
He added: “Although some doctors do still mistakenly believe that ME/CFS is a psychological illness, there is now very robust evidence being produced to show that we are dealing with a physical disease process that includes significant abnormalities involving the brain, muscle and the immune system.”
I have had tests that showed abnormalities and tests that were normal, but nothing is ever taken any further just called insignificant. I have lost nearly 20 years of my life to this stupid illness, it has prevented me being the mum, wife, daughter etc that I should be. It has a huge impact on my family as well as me,
Any diagnostic testing is not going to give me back the almost 20 years of my life I have lost to the illness.  Even if there was a test and treatment today how would I get back to normal, no one would give me a job, I can’t get back Emily’s younger years and be a better Mum to her.  We would not be any better off as I would lose my help, small amount of money I get and my car, but would have no way of earning and providing for my family.  It would be great to be free to do whatever I wanted, but money would still prevent us from things like travelling or having more of a social life.  I have always wanted another child, but I am too old for that now so I wouldn’t have that chance either and I am sure things like adoption would still be out of the question for someone who has been ill and not done anything for 20 years.  It won’t get me back all the hours I have to rest or am not able to play with my daughter or that I have been dependant on my husband just to get out of the house.
I actually feel very annoyed by the story and although it is progress it feels like another false hope.  If testing became available I am sure people who have been ill for a longer time will be at the back of the queue.  I have not been tested for anything for years, once you have a diagnosis of ME you are in the rubbish heap ands they say its pointless testing for other things. Then of course they say there is no way of diagnosing ME. I hope things do progress for those who can benefit as I would not wish this rubbish on anyone.

I know this sounds very negative and I wish I could feel happier, but it just feels like another insult and nothing will take away the years of disbelief in the illness and the stigma attached to it.

No amount of stories will change the effect that ME has and what we have to live with each day and how our lives are totally changed. 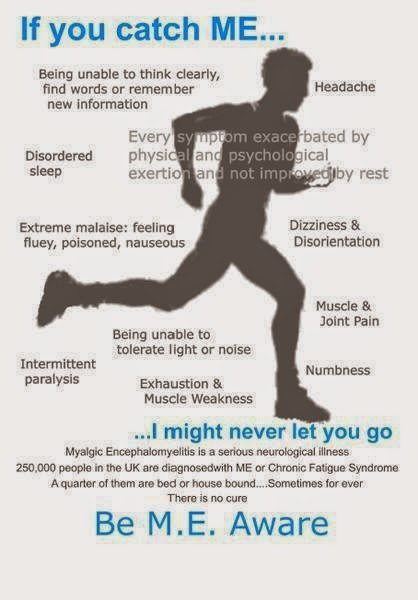 I saw this image on facebook today and thought it really well summed up the symptoms and daily struggle.
I realise that what I have said may sound ungrateful and like I don’t want to recover, that is not true, I just get so fed up of stories that make out ME will be cured next week and we will all live happily ever after.  If there was a cure and we did get better, yes it would be great, but we would still live with a lot of issues and life can never be normal.