Living with ME and its limitations can have a huge impact on what is pleasurable.  Things that other people find a pleasure are often hard work.  With so many food intolerances I also get little enjoyment out of eating out or even a piece of chocolate.  My pleasure can be found in a cup of tea.  Not very exciting I know, but I do love a cup of tea, here is what is in my cupboard. 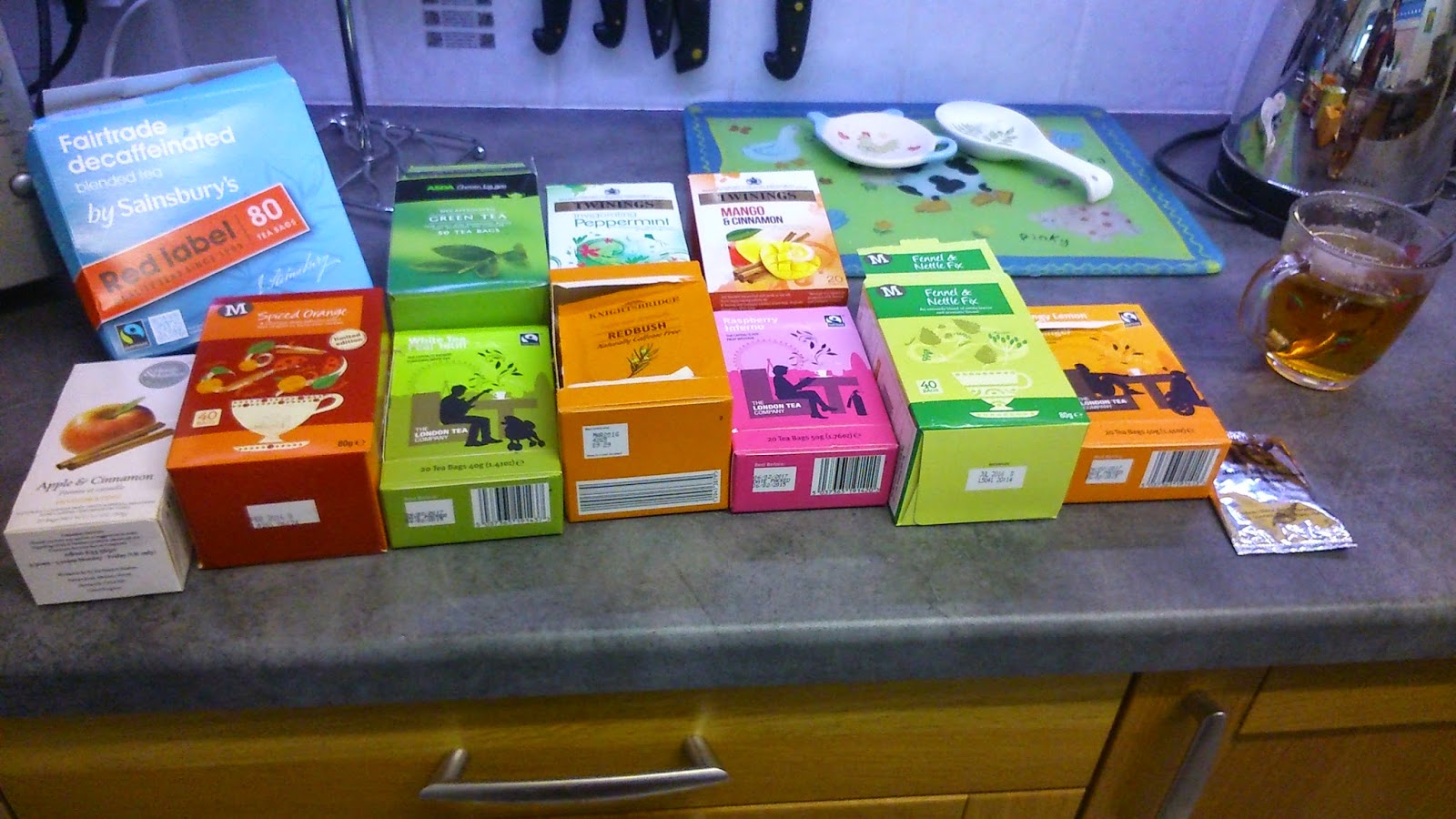 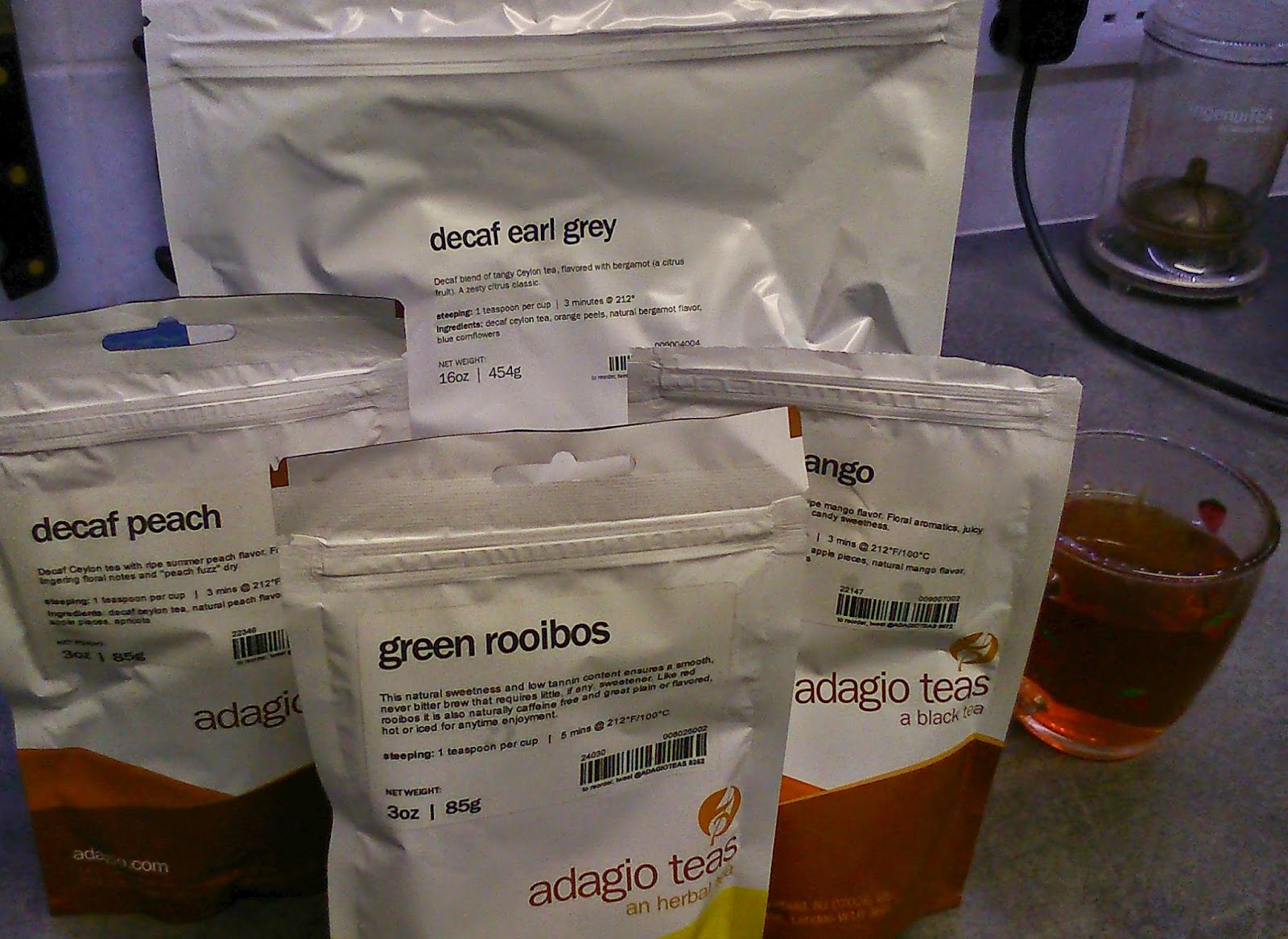 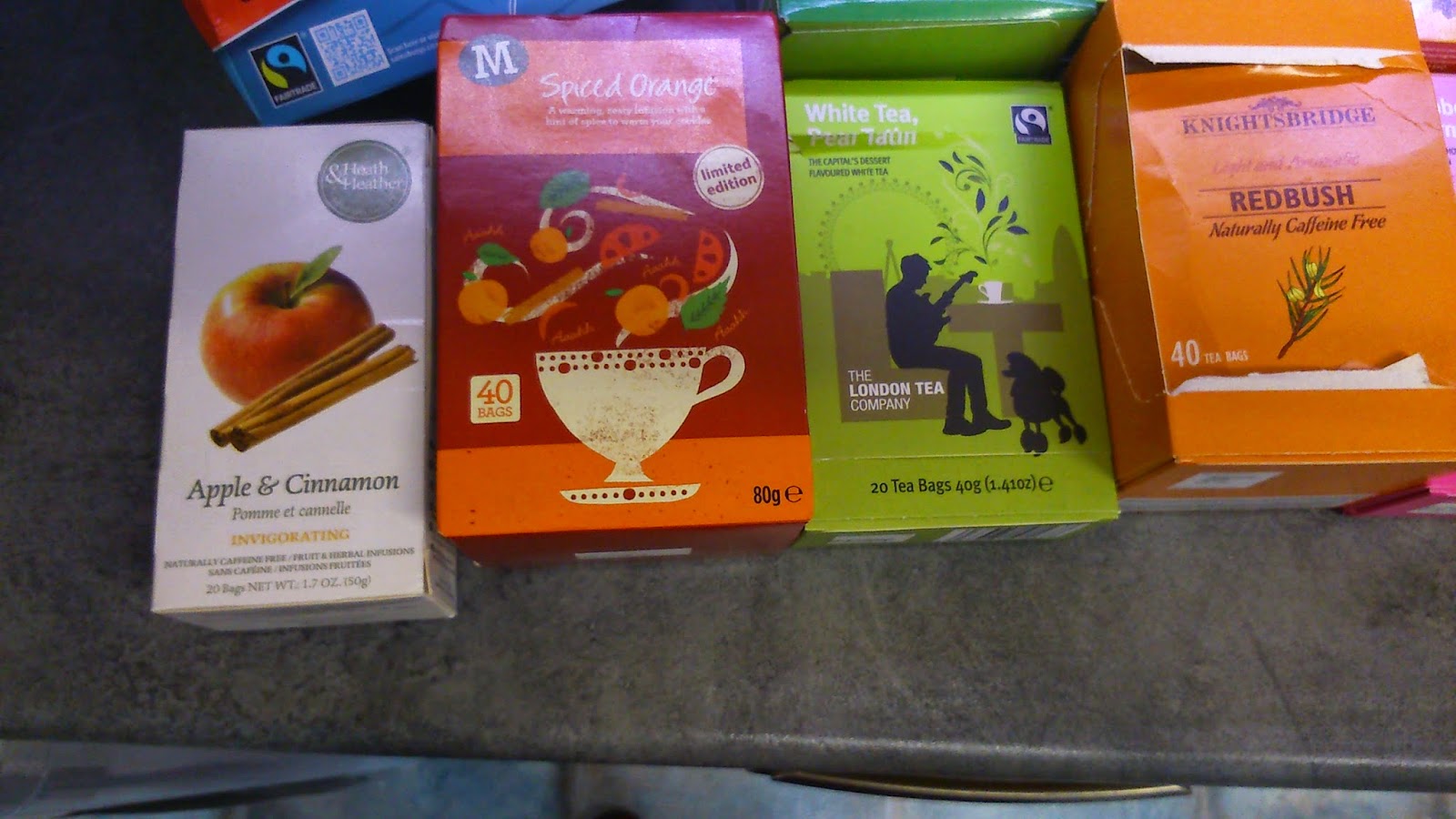 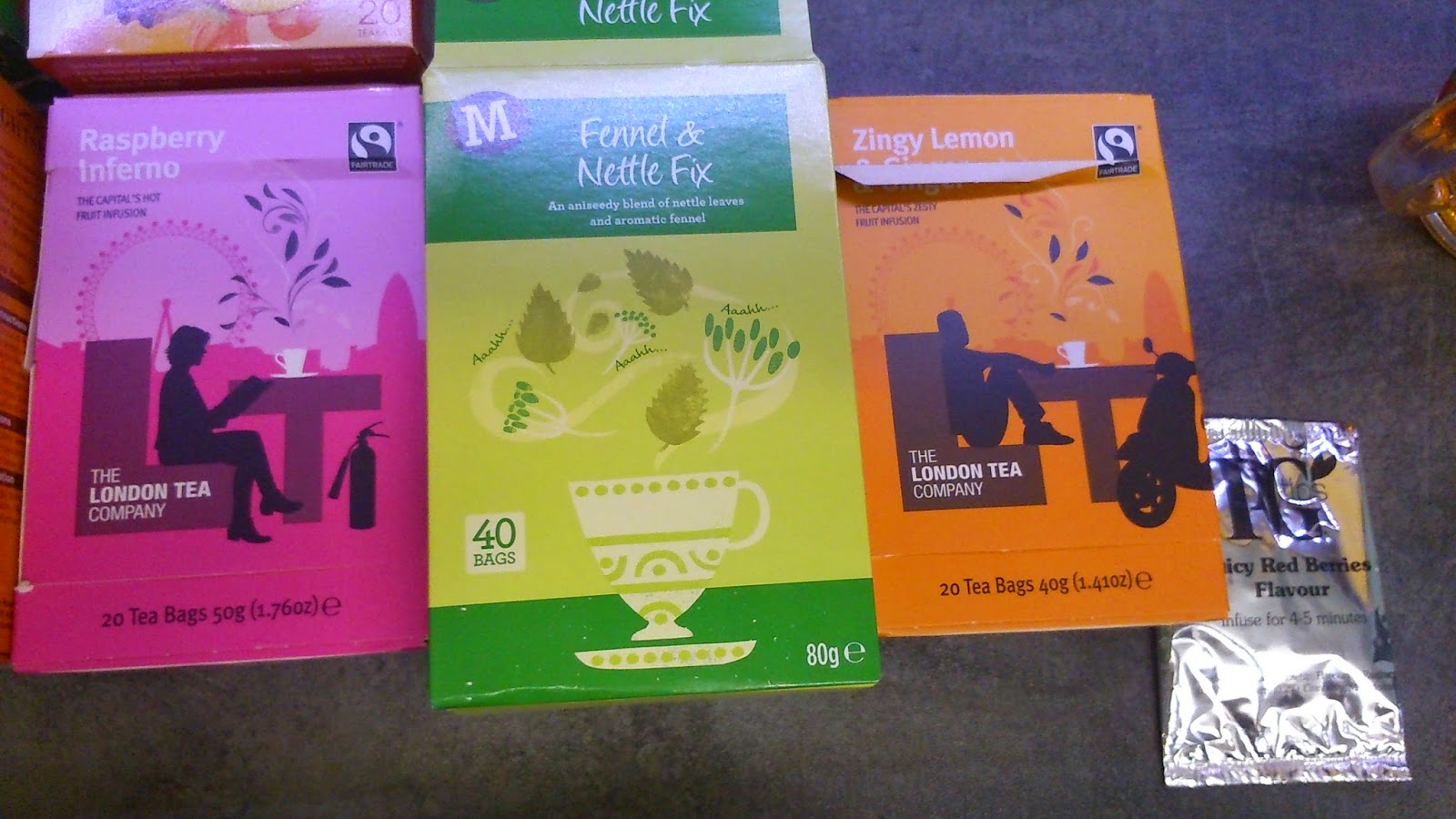 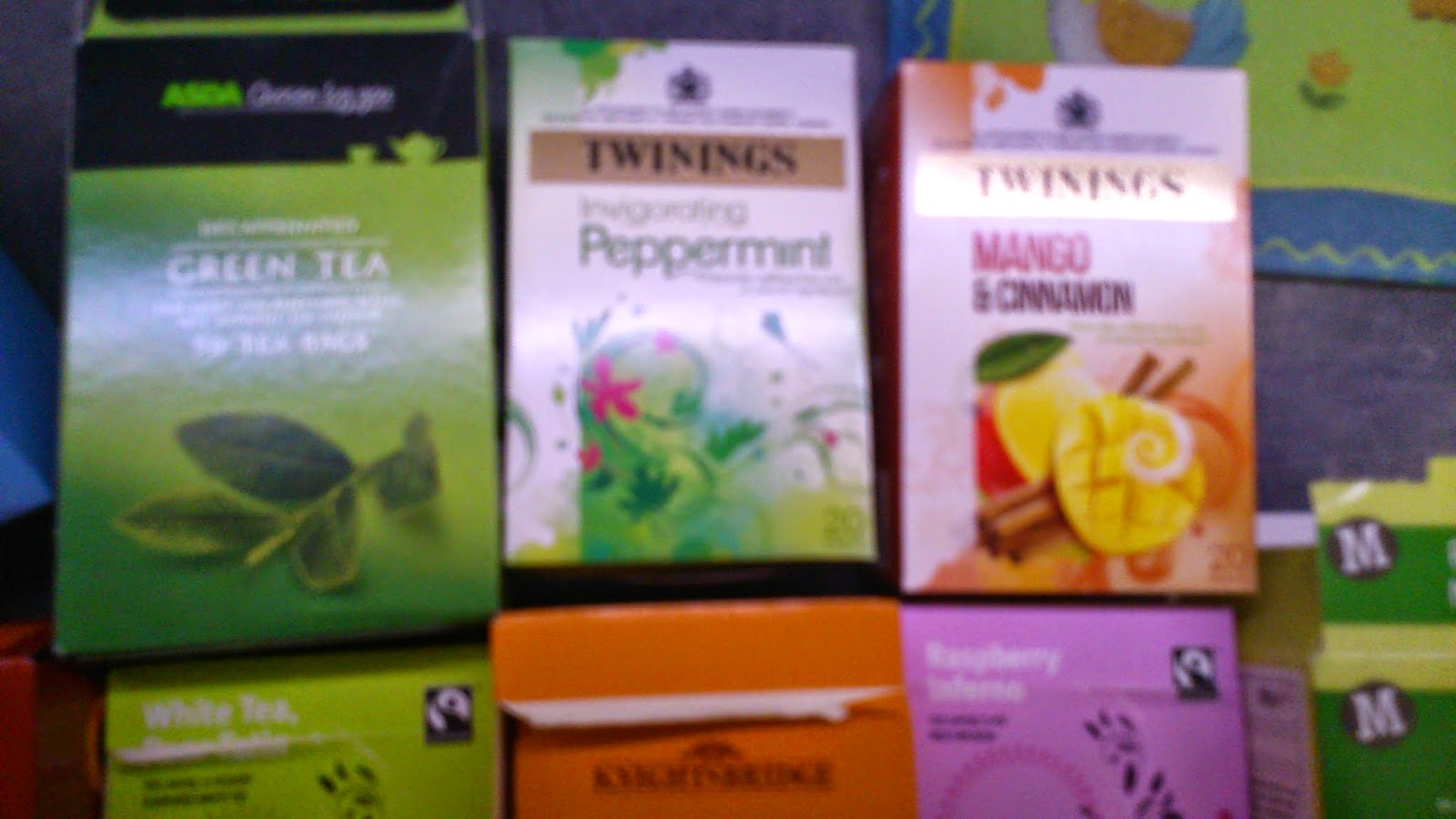 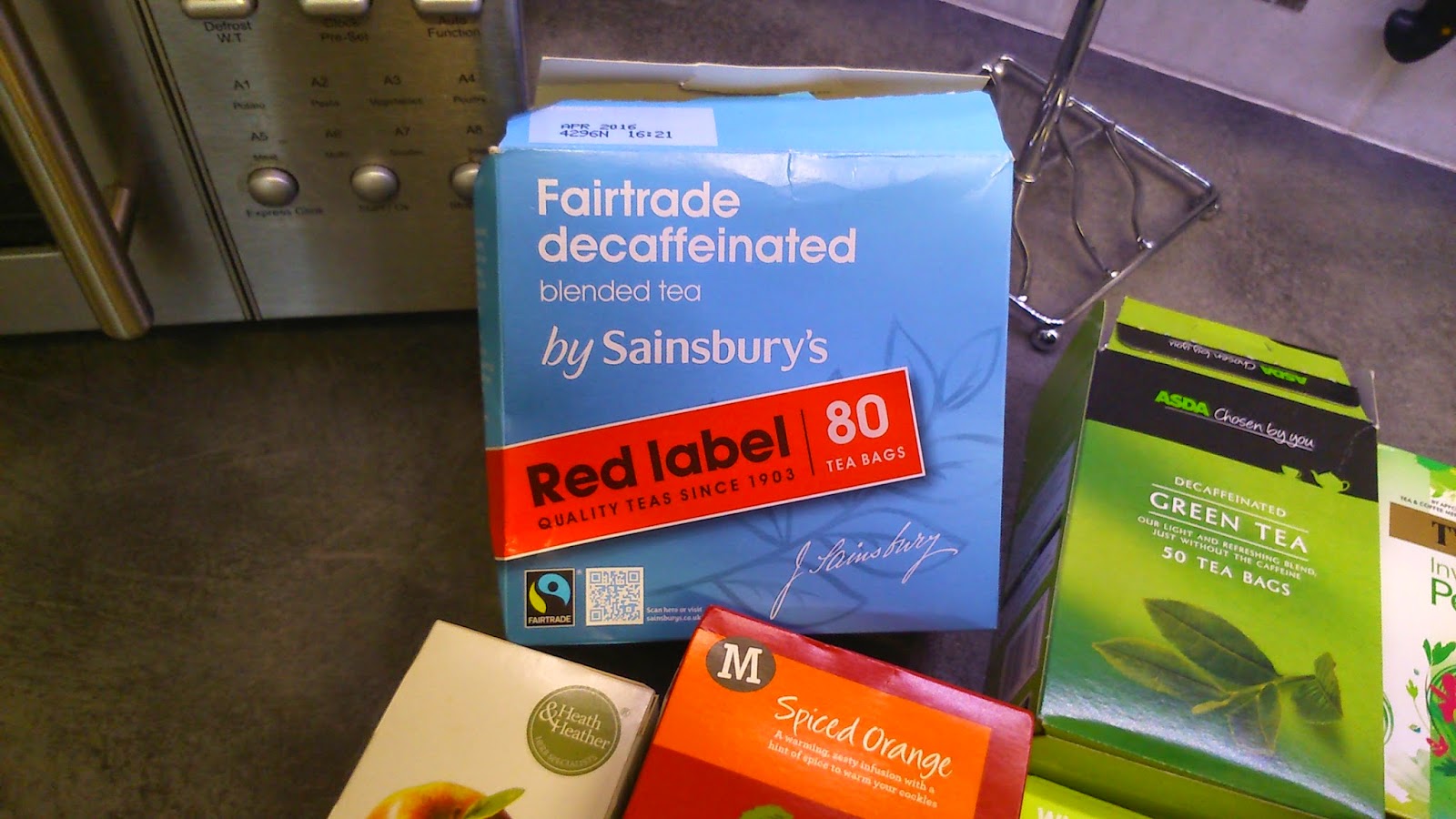 My favourites are Redbush, Green Tea and Decaf Tea.
One of my intolerances is Caffeine which many people do not realise is in tea.  It is highest in black tea (that’s normal tea).  Chart below shows levels in different teas (http://www.ezentea.com/), think I need to save the chart as when I am out I can never remember the levels and end up jittery or worse from drinking the wrong thing. 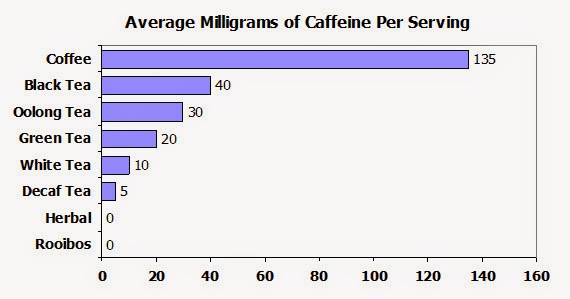 I can occasionally drink small amounts of Green tea, but now there is decaf quite widely available I drink that.  Drinking out is getting easier as many places now have standard decaf or a green tea or fruit teas.  I do love it if we find a place with a good choice and new things to try.  I have to take care with fruit teas as many of them are flavoured black tea, if it’s called tea its usually got black tea in it, ones called infusions are usually just fruit.  Decaf teas are not caffeine free though.  Adagio teas also states “Also, keep in mind that, because teabags contain broken leaves of smaller size, they produce an infusion with more caffeine than loose tea does. This is also true of very fine loose tea. In comparison, the same volume of coffee yields at least double the amount of caffeine. In fact, most sodas have more caffeine as well.”

As you can see from my collection I buy them in any shops, often getting ones that are on offer.  The ones I found most recently were a set in Lidl; Zingy Lemon and Ginger, Raspberry Inferno and White Pear Tatin.  They sounded interesting and although I don’t drink that many fruit ones I do like a change, but always go back to the decaf, Redbush and Green tea.  The lemon and ginger is quite pleasant as long as its not too strong I am not a big fan of ginger flavour, but lemon flavours are nice and I will sometimes drink hot water with a lemon slice in it.  The Raspberry one was made with caution too as apparently it contains Chilli, so I expected not to like it, but you can’t taste the chilli so I like it.  The White Pear Tatin was the most appealing, but it has quite a strong vanilla smell, the taste is not so strong, but its too sweet for my normal tastes.  I think these will get drunk few and far between.  You will notice quite a few with cinnamon in; Apple & Cinnamon, Spiced Orange, and Mango and Cinnamon, its a nice warming flavour and reminds me of things like apple pie and hot cross buns.  Also in the collection are some that are not that pleasant, but I have to help my digestion so only drink after a meal, if I remember; Peppermint and Fennel and Nettle they wouldn’t be my tea of choice.

I have found a great online tea company Adagio Teas.  As you can see I have a few bags, mainly as I buy enough to get free postage.  They have a Rooibos (Redbush) page and Decaf  page I have tried them all, except the sweeter sounding ones.My favourite are the earl grey flavoured ones Decaf and Rooibos.  With it being fresh and leaf tea the flavours are great.  The cost per cup is rather off putting, but I tend to use each lot twice as it is plenty strong enough.  I drink all my teas with no milk and no sugar so don’t like them very strong.  I have not tried the white teas as I think the caffeine might be too much in these brands.  Many places have Teapigs which are very good, but I haven’t bought for myself as they are quite expensive and also Eteket.  I have not been in a Whittards recently they are the high street shop for tea and they don’t have many caffeine free ones that I like and they are quite often too sweet.  This said most supermarkets now have a good range of fruit teas and alternatives.  Lidl have started selling their own brand Knightsbridge including decaf and Redbush.
I have a rather mad idea of hosting a giant tea party with loads of different teas to try where people come along and bring a picnic and pay to be part of the event and there would be cakes and buns to buy and maybe craft projects too to raise money for charity.  I could be the Mad Hatter!!  In reality more like the Dormouse!  I have often thought about this, but the organisation would be too much and if it were to raise money for ME charities I don’t think there would be much of an interest, but there are plenty of other charities equally worthwhile, maybe one day!
Meanwhile, it must be time to put the kettle on now, perhaps I should change my name to Polly!  Now which one shall I have this time?