Every picture tells a story or so they say, or the camera never lies, but in this case the pictures were not telling the truth.  They show happy faces, they show peace, they show fun.  They don’t show the pain, the difficulty getting ready and getting there, the payback for doing it, the effects of the bright lights, the effects of having to concentrate on what people were telling me to do and still getting it wrong.  They don’t show the weeks of preparation and anxiety about getting it right and being ready. They don’t show ME at all do they?

We tried to tell a story by taking the sleeping pictures 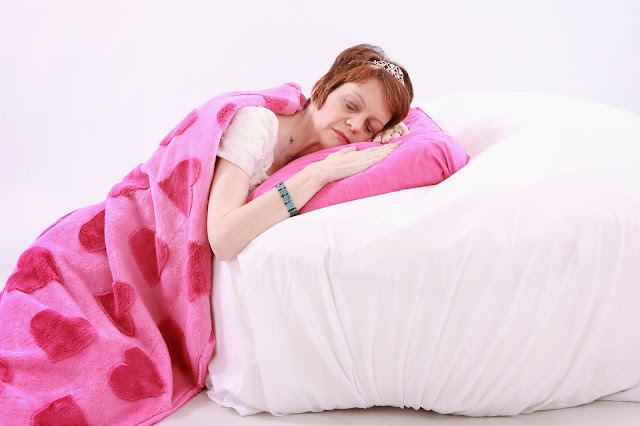 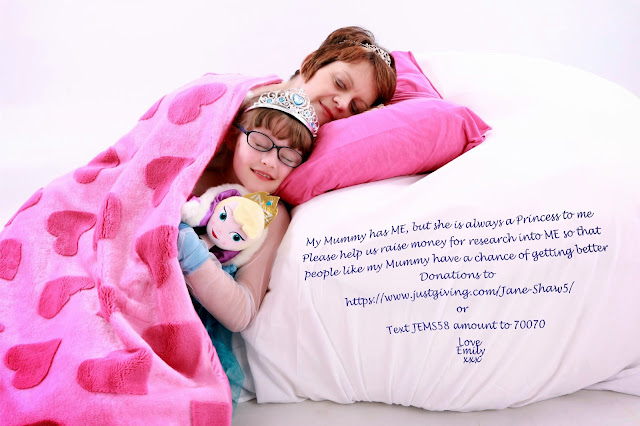 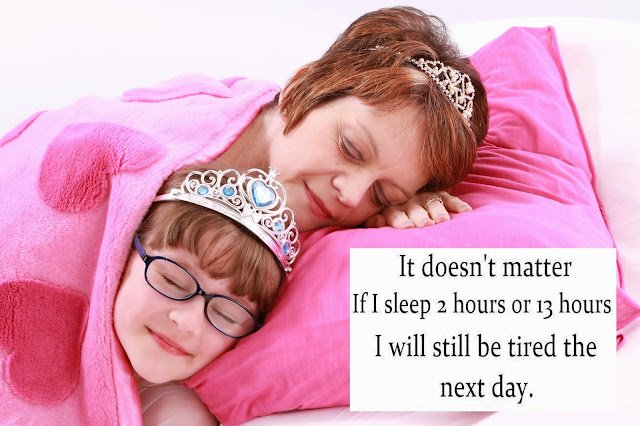 But they are still far from the truth.
Then we have the ones where it looks like I am holding Emily 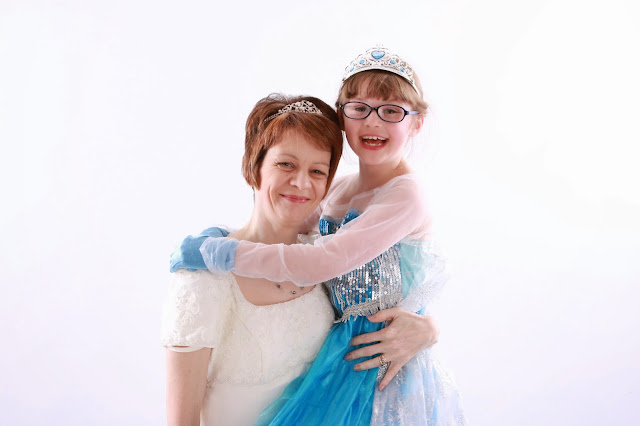 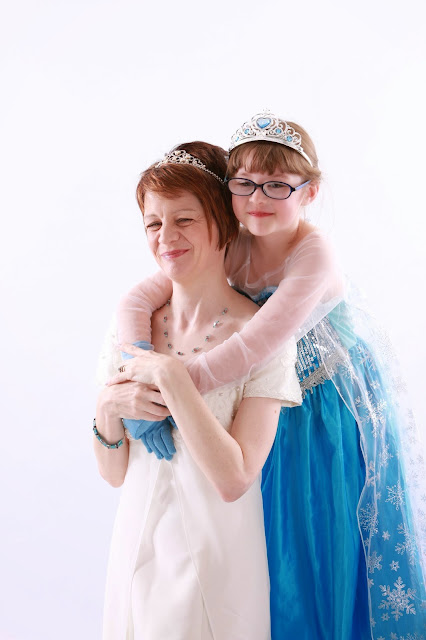 Actually she is standing on a chair 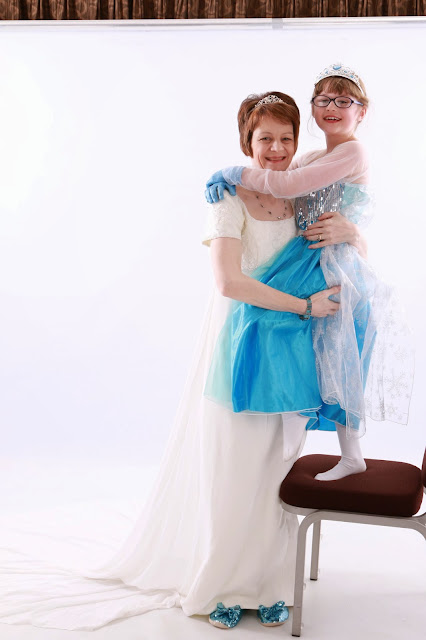 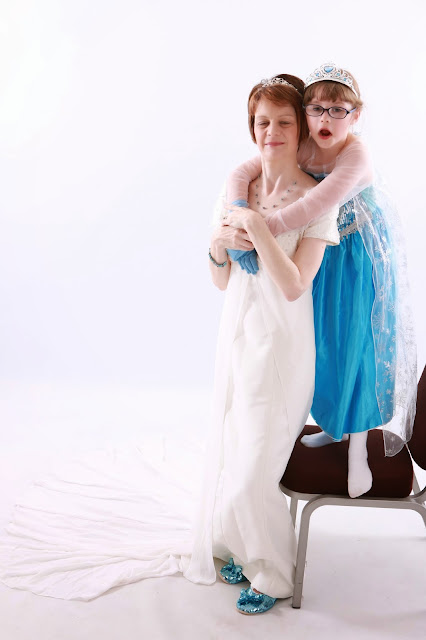 Then the ones of me on my own, smiling and laughing 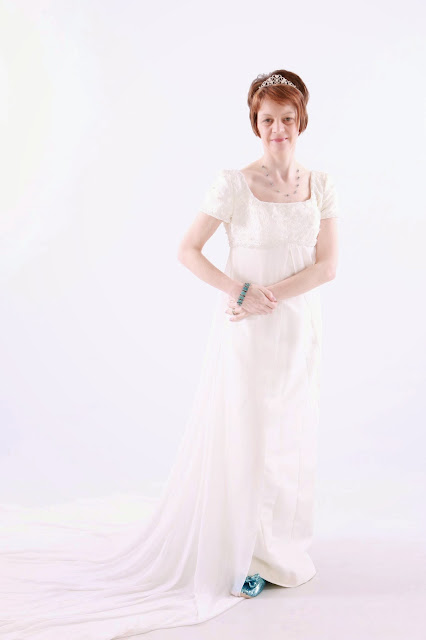 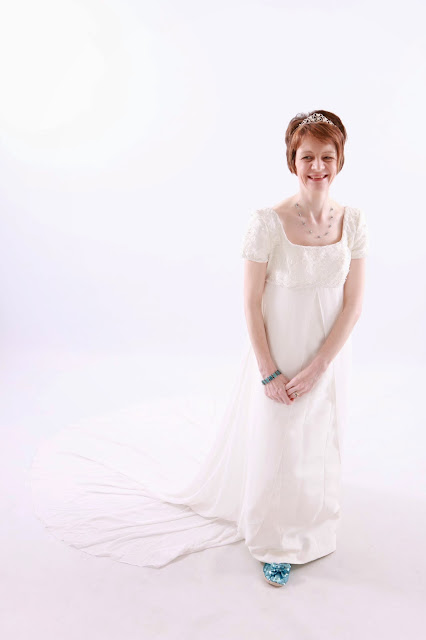 Again they don’t show the effort of just standing there and the brightness and trying to follow instructions, the difficulty moving about in the dress.  They do demonstrate putting on a brave face 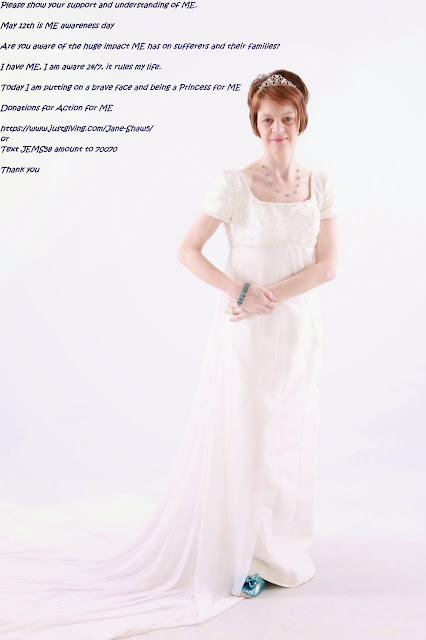 They do maybe demonstrate some of the isolation and the feeling of being alone with the illness, as what you don’t see is the other four people who were in the room, or that they were doing all sorts of things to make me laugh and smile.
The ones with Emily, don’t show the pain I feel at missing out on so much of her growing up and and the guilt at not being able to be a proper Mum to her, the difficulties I have trying to explain my illness to her and the battle I have to do the best I can, which never feels enough. 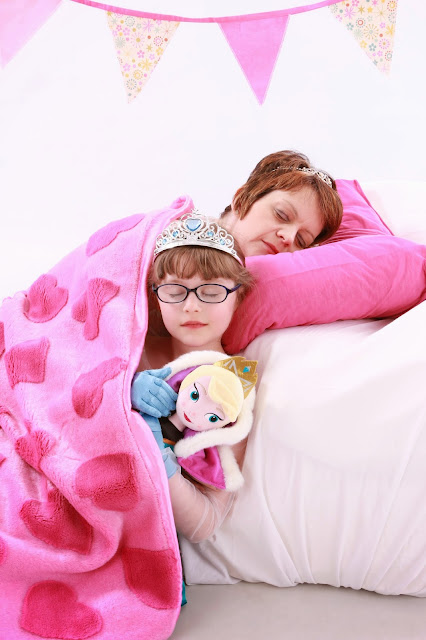 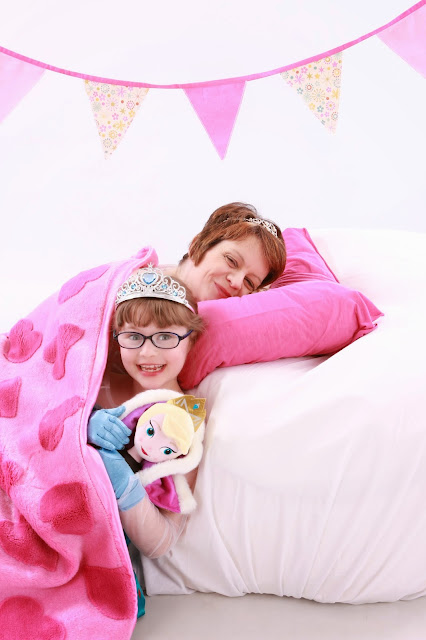 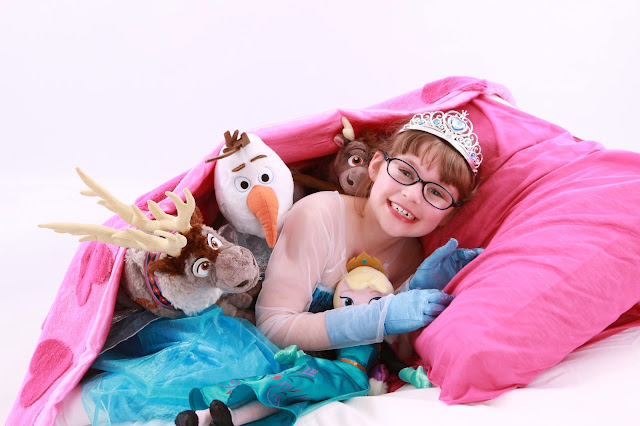 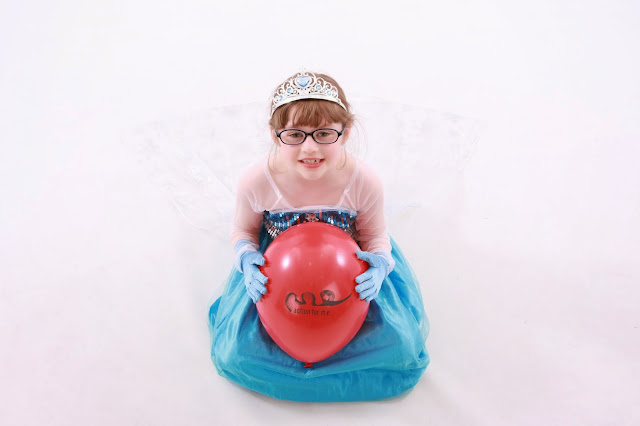 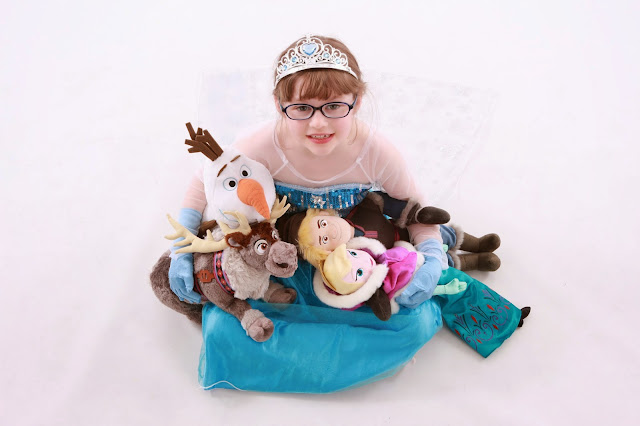 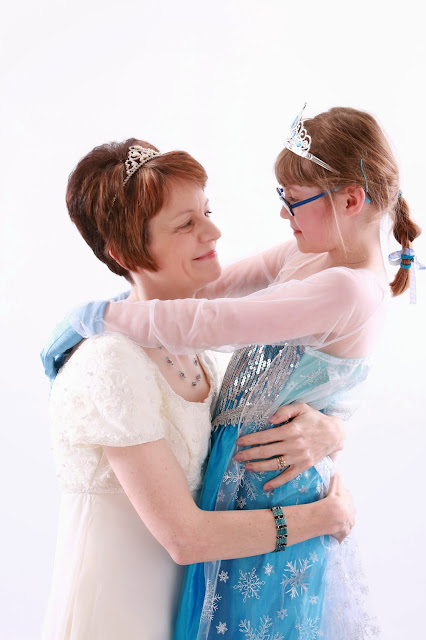 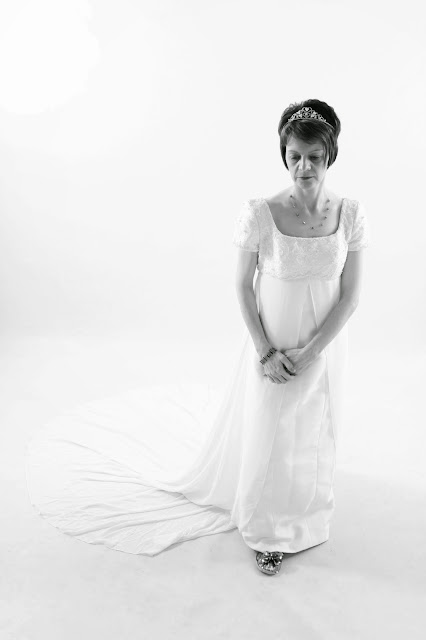 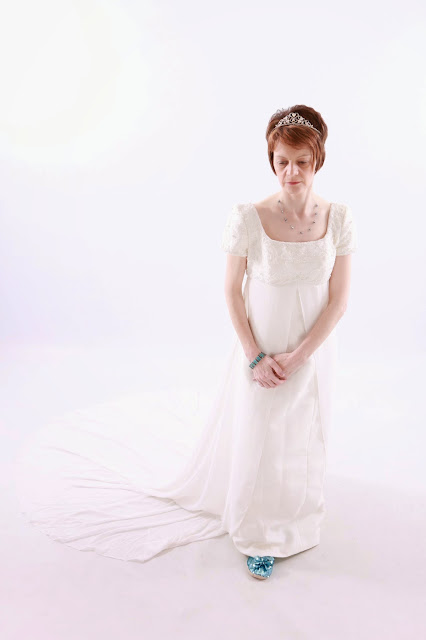 The sad pictures maybe show better reality, but still dressed up and wearing make up is not the real me.
Wearing comfy clothes and shoes that take minimal effort to put on and wear is much more me, hence the slippers 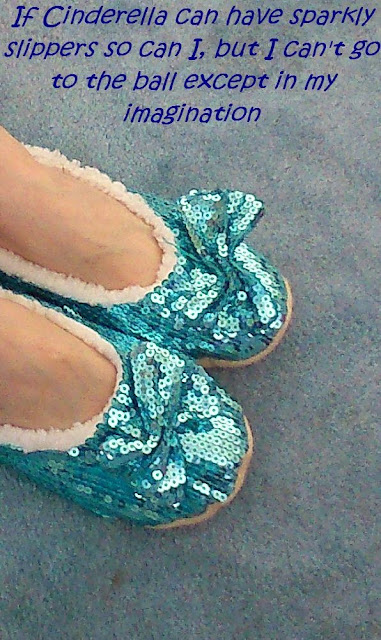 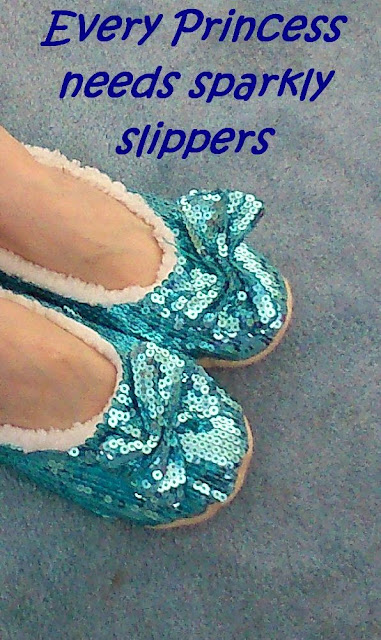 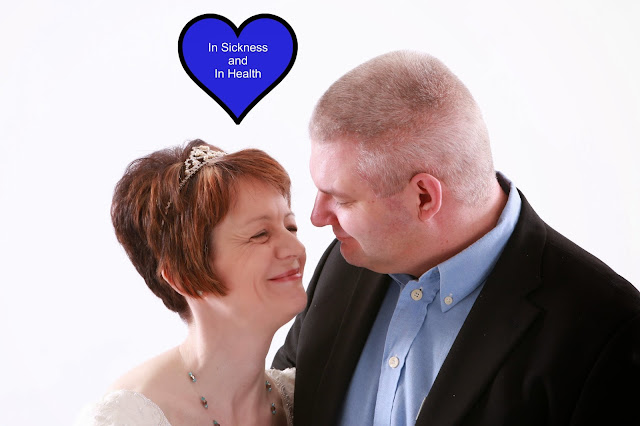 This doesn’t tell that my husband also has health issues and had cancer at 29 and needs a complicated drug regime for the rest of his life.  Or that he has to work full time to cover the expenses of my being ill, cost of physio, wheelchairs, special food and that he has to come home from work and cook a meal and that he has to take me everywhere I need to go and does many things on my behalf.  That he has never been able to enjoy his recovery as he has always had me and Emily to care for.  We have to pay out for decorators and gardening because he just doesn’t have the time for doing DIY.  It doesn’t show the stress and the arguments that we have, I don’t even recognise those smiles.  That we never spend any time together as I am too worn out once Emily has gone to bed and we hardly ever have time without Emily and if we do it’s to difficult to do anything. 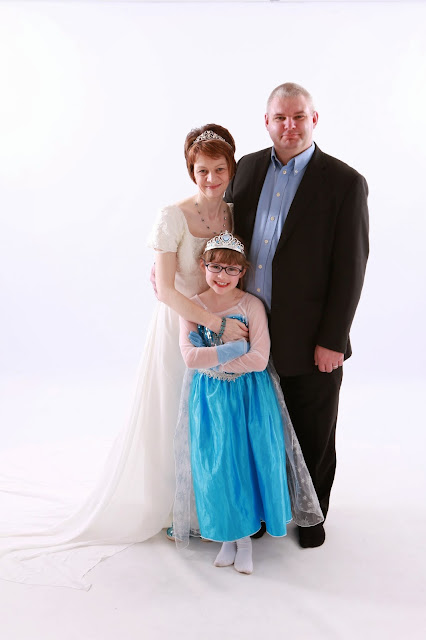 The happy family photo, again a rare sight to all be in the same room and looking happy, no sign of the strain of getting us all ready, the arguments and tears later on because I felt so ill and Emily and Rob were fed up.  The fact that we have to accept that this is our complete family despite the longing for another child that we can’t have and the times that Emily is so upset because she has no one to play with or to share the burden of having a sick disabled Mum, someone who would understand how she felt, although I would not wish that upon another child at least they would have each other for comfort. 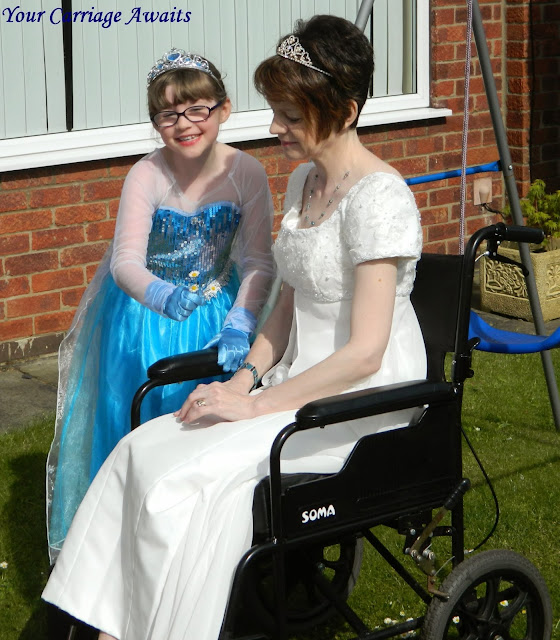 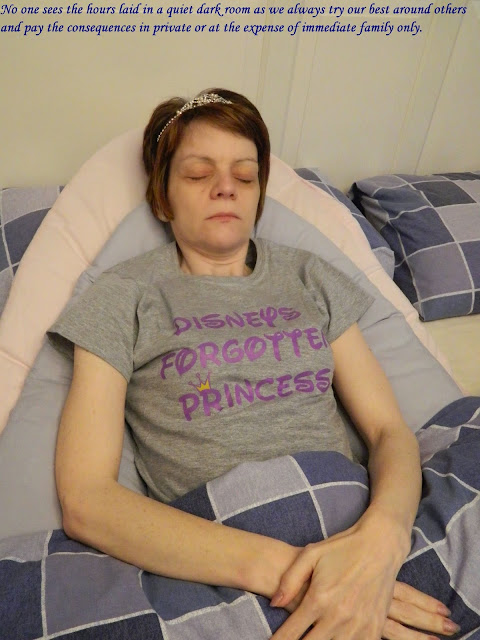 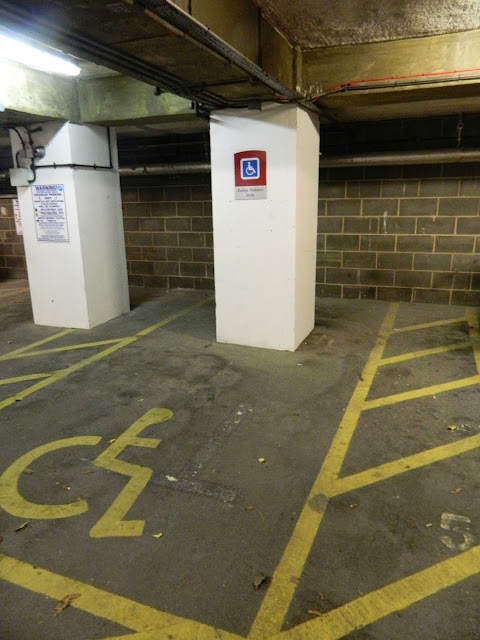 These pictures from the same day show a more realistic story, having to use a wheelchair to go out, spending hours resting in a dark room and the fact that some places see disability as a joke!  Out of 4 disabled spaces 2 were obstructed with concrete pillars so couldn’t be used by a car, but they have provided the obligatory spaces.  I emailed them to complain, but as yet have not has a reply and don’t really expect to.  Ah well I won’t have to worry soon as my entitlement to a blue badge is coming to an end due to criteria changes, so then I won’t be able to go out anyway!
I need to stop now as this long post also gives the wrong impression, it doesn’t show, how many mistakes I have made, how long it has taken, the pain and dizziness and shaking to get it complete whilst I still know what I want to say.
So have I raised awareness into ME?  I don’t know, I think I have given a very good demonstration of why people think people with ME are liars and not really ill at all.  I pushed myself made myself more ill and gave totally the wrong impression.  No wonder people don’t understand, but if I showed the real story there would be nothing to see and we can’t spend all our lives being miserable and feeling sorry for ourselves, sometimes you have to put on a brave face and make an effort and accept the consequences of it.