It’s been a while since I posted, Christmas was quite overwhelming in a number of ways and very difficult.  New Year was quieter, but depressing!  I don’t really like Christmas and New Year as for me it marks another year with no progress and another year older having got nowhere, so I get rather down, this year it was even worse, but I tried to keep as bright as possible for Emily.  I am struggling now I am back to being on my own all day and all the payback is hitting me now.  It’s also that time of year where you see people or hear from them and they say “did you have a good Christmas?”  And of course you have to say “yes thank you.”  I will bounce back a bit, I have Emily’s birthday party to organise now, only 3 weeks on Friday, can’t believe she will be 9!

We live in Leeds which was badly affected by floods over Christmas, we were away from home, but watched it unfolding on TV and online.  Where we live wasn’t affected by flooding as we are on a hill, but some of the low lying areas near by were affected.  Kirkstall Road was the main area shown on TV, I used to live off Kirkstall Road as a student, it was quite a run down area then, but has changed a lot and there is a big entertainment complex there which was affected.  We rarely go to that area of Leeds, but had been a few days before to the cinema as the cinemas we normally go to weren’t showing the film we wanted.  Actually it was very disappointing, we went to she Charlie Brown and it was so slow and hard work.  Emily spent half the time asking to leave.  We took a friend with us and if she hadn’t been there and watching the film we probably would have left, will have to choose something more exciting next time.  Our electric went off sometime over Christmas which we think could have been due to power surges from the flooding.  Most things came back on, but some sections of the house tripped so the freezer didn’t come back on and we lost everything in it.  There wasn’t anything expensive or special, but it was still costly to have to throw it all out and replace it.  It was a relief that we didn’t need to go out and buy a new freezer though.

Living with a chronic illness is hard work in itself and robs you of many things including who you are or want to be.  I feel I am trying to play several roles; Mum, wife, daughter, daughter in law etc and they can’t be done together as they are all different.  If you go to a play sometimes actors play more than one part, but that’s only if they are small parts, they change appearance and hey presto they are someone else, but the lead characters couldn’t be more than one person as they can’t be two people at once.  They can do it on TV eg Mr Tumble as they film separately and then splice together, but we can’t do that in everyday life.  All these roles are on top of full time sick person.

I use what little energy and time I have I use all my energy doing things for other people and then have to spend big chunks of time in bed when I am on my own.  Emily said the other day she doesn’t like it when I rest at weekends and asked that I have a shorter rest so that we can do things.  It’s not an unreasonable request given that we seem to do chores and then I go to rest and don’t come back until nearly tea time.  I often sacrifice rest if we are away from home as I have no choice.  In her eyes she thinks I make more of an effort for other people and put them first which I do, but not consciously and she doesn’t see the payback I suffer for it.  She is also not able to see that many of the things that take up my energy are for her, getting her to school and activities, sorting out parties and arranging to see people etc.  I often don’t join in the things I have organised, I do the background work from my phone and computer at home, but have to miss out on events. or at best be pushed around in my wheelchair and then have to rest when at home.  This makes me feel very bad at my role as a Mum.

I rarely spend any time with my husband. On the rare occasions that Emily is out and we are together we spend time trying to get things sorted out or I use the time to rest.  We had a couple of hours together on New Years Eve and I spent the whole time in tears as I was so exhausted and fed up.  We rarely make nice plans as we have got so used to anything special being spoiled we have changed a lot of plans and missed out on many things and I think we have now got into the thinking there is no point as it will get spoiled.

My identity is so vague and mixed and I don’t have one role that I can do well and be proud of.  I don’t have a job with a job title and something that I do and get satisfaction from or get rewarded for ie. getting paid.  My husband is about to start a new job, he gets a new job title and a promotion so he and others can also see that he is making progress and being successful.  I can’t even say I am a housewife or stay at home Mum as I don’t do my own housework and my daughter is now at school 6 hours a day.

I want to get back to my craft stuff and have something to take pleasure from, but it still doesn’t feel right just something to fill time and I don’t have the energy to become better at it or learn new skills or do anything for very long.  Most of the time I don’t get to do much as my energy and time are taken up with a very boring daily routine.

I will be 45 this year and I don’t want another miserable year, just getting older and making no progress, but what can I do?  I want to have some fun, do something for me, be able to enjoy life, be helpful, be useful, be me, but I really don’t know how to do that and I feel that I will just plod along getting older and not getting much out of life.  I want to be a good Mum, wife, daughter etc without struggling and always wishing I could do more or be better or pushing myself too hard and making my ME worse.

Oh dear, as I said New Year is a bad time of year, hopefully my next post won’t be so depressing.

I will leave with a picture of my beautiful cat who was very ill over Christmas and we really thought we were going to lose him.  He is 16 1/2 and we can’t face the thought of life without him.  This picture was taken last night when he was laid on the bed with me and I didn’t have the heart to move him so I could get comfy to sleep!  He did move eventually and then woke me about 6am making a right fuss because he had used his litter tray, he thinks we need to know!!  It’s just good to know he is back to himself again. 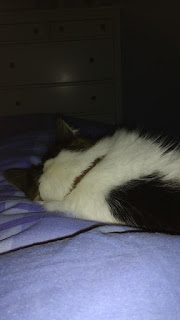