I have just read an article by another ME sufferer who says they enjoy celebrations, I am afraid they fill me with dread and I find them really hard work, but do my best and accept the consequences.

to this in what seems a very short time. 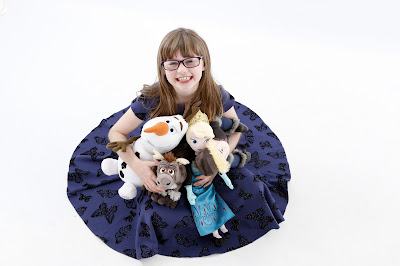 In other ways it has been a very long a difficult 9 years, with many ups and downs.  I think the most scary thought is that in another 9 years she will be 18.
Having ME makes me feel I have missed out on so much of Emily growing up and I often get my priorities wrong, putting my energies into making sure she can do what she wants to do and not be denied experiences because of my ME.  I think I try too hard sometimes and go over the top to compensate for my limitations and use my energy getting things organised rather than just cherishing time with her.
I was determined not to organise a party this year, but as ever I gave in as Emily wanted a party.  It will be the first party we have had at home and I have had to round up a few helpers as I can’t stand the thought of it all in my house and having the noise and mess all around, but hiring a venue and sorting an activity becomes far too expensive.  Last year Emily had a new bedroom built so we are combining a sort of bedroom warming and birthday party and having a photo shoot party with WhiteBox Photography.  The picture above was taken by them and we love their photos, so hoping it will be a great day.
ME wise I know it will be hard and that I will feel awful afterwards, I already do and there are 2 days to go until the party.  her actual birthday being tomorrow she will be at school and then is going to her usual Friday activity at the local church and taking a birthday cake of course.
I thought I was really organised this year starting making her card just after Christmas and I did get it done in good time, but then had a rush on to get Rob’s finished too (his birthday Monday).  having tp spend 2 days in bed this week didn’t help much!  I have printed out a big yellow no.9 and a big duck.  The party has a bit of a duck theme.  It took me a while to sort out a cake, as my usual cake making person can’t do this year, but thankfully another one stepped in, I didn’t fancy a shop one after some of the great ones we have had in previous years.  I am really excited to see the cakes.  The cakes will be the star of the photo shoot along with the big yellow duck that Emily has had in every photo from WhiteBox.
I also thought I was organised with presents, but then got to yesterday and they still weren’t wrapped up.  My wrapping up leaves something to be desired at the best of times, so many of the presents are just in gift bags, well she won’t have a lot of time to open them so I have made it easier for her 😉  Her main present is a hamster, which I haven’t bought yet and don’t have to wrap, but have to find the time and energy to take her to buy and find somewhere in the house for it’s cage to go.  She is going to be quite disappointed that she doesn’t have a hamster when she gets up in the morning, but I am not quite sure how she expected me to buy and hide one!!  last week I took her and her friend in the local pet shop to look at hamsters, there was one we liked, but then it bit her friend so we went off that one.
Rob is having tomorrow off work so we can get things organised and get decorations put up and finish the last bits of shopping.  It’s poor timing as he started a new job this week, but even worse timing was me being too ill to do school runs on Tuesday and him having to work a shorter day.  Even though it is a new job it’s in the same place and the people know him, so I hope it doesn’t count against him too much!  I know he does work at home after I have gone to bed sometimes, which makes me feel really bad.  I also have a list of other things for him to do whilst he is not at work, no rest for the poor man.
Will post an update when I am up to it after the party.