“How do you decide where to go on holiday?

We always tend to go somewhere max of 3 hours away as I find the travelling hard, hubby doesn’t like long drives and Emily hates being in the car. Before we had Emily we used to go on peaceful Lakes and Mountain holidays, but airports are a nightmare and would be even harder with Emily, she hates crowds and would be anxious about the plane and of course once you are on there is no going back.

For a few years we have done caravan holidays where they have facilities and entertainment, but I miss out on most of it. Last year we did a coach trip to London which was hard work especially as Rob got ill, but we managed it has there was no driving for him.

We would like to go to Manor House craft and activity hotel which sounds great, but is too far away. Plus points it is full board and has lots of activities. Negatives it is too far even if we break journey there and back and I would end up doing too many things.

We also wanted to try Euro Disney but same things apply really and none of us have passports so would have to add them to the cost. Summer holiday prices are bad enough as it is.

We thought about a cottage but then we have to sort out food and activities and keep Emily entertained so its much like being at home.

Being away is hard as we have no help, but we also don’t fancy going with other people as then we don’t get to do family stuff and I would get left out completely.”

The attraction of somewhere abroad keeps popping up with all the adverts on TV and after we got a postcard from a friend who has just been to Austria. We had a holiday in Austria at Christmas in 2005, seems forever ago.

Holidays for the last few years have been so difficult and we have been so stressed and worn out before we even set off that they have not been good experiences.  If we had some one to make all the arrangements and do the packing we would be in a better position to enjoy the holiday itself.  The travelling is difficult, but you can’t just arrive in a place without the effort of getting there.

Our main issues are not really ME related though, as I use my wheelchair and can be pushed around however I feel.  The main issue is the problems that Rob has if he gets over tired or over stressed or if he gets a vomiting bug, then we are really stuck as I am unable to walk or drive and Rob would need hospital admission, due to issues with the medication he takes since having his Pituitary removed due to cancer.

Rob did an internet search on ME friendly holidays and it suggested a cruise.  I like the idea of a relaxed cruise not one that is formal and stuffy, but worry about how child friendly they would be. There are very few that start in the country and most that do go from Southampton, which is too far from us.  Most cruises require flying too, but airports are such hard work.  They are huge places and Rob can;t push me, manage the luggage and keep hold of Emily.  The only assistance available is after check in when you have got rid of your luggage.  Train travel is also a nightmare as booked help often doesn’t turn up and boarding and exiting train is very difficult if it is not an terminating station.  I can get out of my wheelchair and get on and off the train, but it leaves Rob with luggage and my wheelchair trying to get on and off through crowds of people who just get in the way.

The coach trip we did last year was better in that Rob didn’t have any driving and that the luggage is on the coach and out of the way most of the time and the drivers are usually quite helpful with getting wheelchair on and off. But the schedules are usually very structured and hectic and you have to adhere to them or get left behind.  Coach travel is usually quite long and uncomfortable and I get very dizzy for weeks after from the motion.  Rob usually passes his time by sleeping or playing on his phone, but I can’t do that and one of us has to entertain Emily who usually just wants to know how long we will be before getting wherever we are going.

Eating away from home can be a nightmare, with so many intolerances.  Some places are quite helpful, but in most places I just have to miss out the bits I can’t have.  Being intolerant to gluten, dairy, refined sugar and fish often means I don’t get much of a meal and especially when I am struggling to cope anyway this is not good for me.

So as we move into March we still have no idea what to do.  It would be easier not to go anywhere, but we do need to get a break from our daily routine and in my case the same four walls I see all day every day.  I rarely get out other than to do school run and to visit my parents.  We also feel like we have nothing to look forward to.

We still have a very idyllic view of holidays despite so absolute disasters, but those experiences are also making us too scared to take a chance on the things we really want to do.  We are also put off by the prices of holidays during school holidays as we don’t want to pay out huge amounts of money for something that is miserable and hard work.

None of us cope well with the heat so foreign holidays in August are not really an option, but there is not really enough time in the other school holidays.  Holidays in this country are often spoiled by the weather and whilst I don’t mind a bit of rain or a cooler temperature it can be difficult to find things to do or to enjoy the surroundings.

Other people seem to have loads of holidays and great experiences and make us feel like we are missing something or doing the wrong things.

We love watching Death in Paradise, the scenery and life style looks so perfect, but in reality it would be too hot and too far to travel, not to mention very expensive.  It is filmed in Guadeloupe.  I think that a murder during the holiday might also spoil it quite a bit, but good old Humphrey would sort it out, he’d probably be really good with Emily too!! 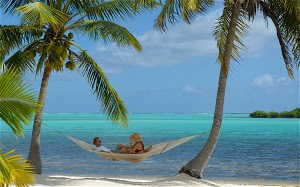