June should be my happy month as it is my birthday and wedding anniversary, but it is rarely something to enjoy.

Being ill for so long each anniversary and passing year marks another with no improvement in my health and no improvement in the attitudes of those around or and real progress towards proper diagnosis or treatment for those with ME.

Deciding if and how to celebrate is always difficult as there will be payback for any effort, but at the same time I get fed up of sitting at home all day every day in the same old routine and long for something different just for one day.

This year my Dad was admitted to hospital the week before my birthday so that added to the stress and resulted in extra trips to see family and provide support.  I managed to get to my birthday, but in the two weeks that have followed I have spent most days in bed whilst my daughter is at school and have struggled a lot in the time I have been out of bed.

None of this was helped by me needing a fast track appointment for a Gastroscopy and Colonoscopy, due to being anaemic and the Dr thinking I had a GI bleed.  Appointments were only available at weekends which meant I also needed to sort out childcare.  This led to Emily being very distressed. Dealing with a distressed child is not easy when recovering from the procedure and having ME.

My gastroscopy and colonoscopy showed no bleeds which is what they were looking for. The Gastroscopy showed hiatus hernia and bile reflux which explains why I get so much indigestion. The Colonoscopy was “unremarkable”, which is good news, but sounds a bit pathetic! But also good to know that there are no ill effects from 30 years of IBS. They took some biopsies to check for Coeliac. I can now start on iron tablets, but still no explanation for the Anaemia. I have not got the iron tablets yet as the Drs take so long to sort out prescriptions and I have to wait until July 7th to see the GP to see what happens next.  The Dr knows that the iron deficiency is not due to a poor intake and is being lost somehow hence the tests as the gut is the most likely place. It’s probably an ME thing as our bodies don’t function in the normal way.

Even though the procedures were supposed to be under sedation I was wide awake and watched it all, which is quite interesting, but might not have been if there was something wrong.  I was supposed to feel drowsy afterwards, but instead got an adrenaline reaction and couldn’t settle because of  palpitations.  Things finally started to calm down over 24 hours later.  I had to be supervised for 24 hours so started to feel the worst once I was on my own, typical.

Can you believe that on Saturday when I couldn’t have anything to eat I ended up playing cafes with Emily and then watching Masterchef with Rob, that should be classed as torture!

Now that I am able to eat normally again I am on the look out for recommended Gluten free recipes or food.  Has anyone got any gluten free meals they can recommend. Our repertoire is quite limited, usually by time rather than ideas. I have lots of recipes and ideas but so many turn out horrid. Want something tried, tested and yummy, but not spicy. I know I am hard to please!

It is less than two weeks since my birthday and it seems a distant memory.  I did manage to got to the cinema and out for a meal as I was determined, but it wasn’t easy and the meal was disappointing. The film You Before ME was great, but made me cry, even though I knew the story and told myself  I wasn’t going to cry.

Reaching the age of 45 makes me feel so old and also makes me feel that I have done nothing with my life and that it’s too late now.  I feel like I should have achieved things by now not just being ill for nearly 20 years.  My birthday is also my wedding anniversary, 15 years, my husband has never known me well, but I used to be better than I am now.  It was also 10 years since I found out I was pregnant with Emily.  She has never known a well Mum and is growing up fast and I am so sad about the way it affects her.  I feel that she carries a big burden for her age and she is getting more and more anxious.  I feel so bad that I can’t make her happy and that she has to live with my limitations too.

I was upset by someone who posted on Facebook that people who don’t work are so lucky.  People who don’t work have no money and independence, no identity or sense of satisfaction, are shown no respect and feel completely worthless unless it is their choice not to work.

The week after my birthday came the EU referendum, which seems to have brought out the worst in people and there is a lot of bad feeling and abuse on social media and being reported in the news.  It is so sad that people can’t get on.  It is also sad that we now have to live with a lot of uncertainty whilst the political arguments go on and people make decisions that affect our lives and the future of our children.  The strength of feeling from both sides of the argument has been quite overwhelming and has upset a lot of people.  It is going to go on for a long time and we will feel the effects for many years whatever happens.  At the moment we have a Union Jack flying outside the house in support of the UK teams in the Euro 16 football, I keep thinking I should take it in as I don’t want to be thought racist, but I want to show my support for the teams, only Wales left now.

I think we all need to adopt a Pooh Bear attitude 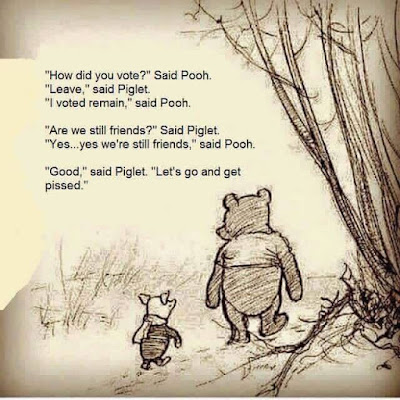 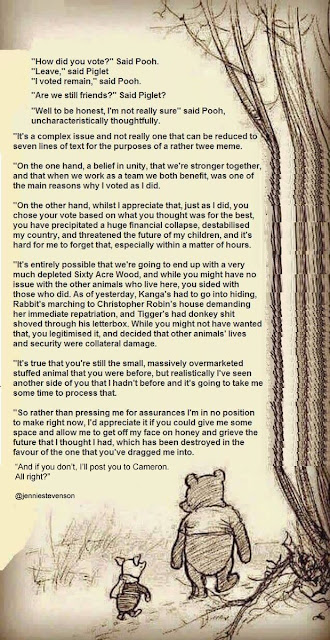 (Guardian UK)
I think we will all be glad to see the back of June and hoping that July will bring some sun and cheer, it’s currently cold and wet.  In my experience June is never flaming except in the expletive use of the phrase.